‘Like a bomb going off’: why Brazil’s largest reserve is facing destruction

Deep in the Yanomami indigenous reserve on the northern reaches of the Brazilian Amazon, the ruins of an illegal goldminers’ camp emerge after an hour in a small plane and two in a boat. No roads reach here.

Wooden frames alongside the Uraricoera River that once supported shops, bars, restaurants, a pharmacy, an evangelical church and even brothels are all that is left of the small town. The army burned and trashed it as part of an operation aimed at stamping out wildcat mining on the reserve.

The army may have taken away the town, but they left the garimpeiros, as the miners are called, who this morning are hunched around a freezer, waiting for the soldiers camped downriver to leave so they can get back to work. Up to 20,000 garimpeiros are estimated by Brazilian NGO Instituto Socioambiental to have invaded this reserve, where mining and unauthorised outsiders are currently prohibited. But the garimpeiros may not remain unauthorised for long: the Brazilian president, Jair Bolsonaro, has promised to legalise their work with a bill in Congress.

“I know it is illegal,” says Bernardo Gomes, 59, sitting by the frame of a bar. Formerly a worker at mining giant Vale, Gomes says his time at the company taught him how to protect the environment. “Today, unfortunately, I am helping to destroy it,” he says, explaining that a nearby patch of dead trees was suffocated by mud sucked out of the nearby mining pit.

Some of his companions decline to talk, including a young woman who arrives carrying a bottle of whiskey and a speaker playing pop music. “Want a photo? Naked?” she jokes.

In eight days reporting from different locations in the Yanomami reserve, the Guardian saw numerous mining pits and barges. Camps and bases had been destroyed along the Uraricoera – but its banks still teemed with outsiders.

With 9.6m hectares (23.7m acres) of wild forest – an area bigger than Portugal – Yanomami is Brazil’s largest reserve. A fifth of its indigenous population died from diseases after 40,000 garimpeiros flooded the reserve in the 1980s, according to Survival International. The miners were expelled and the area declared a reserve in 1992 following a campaign by Survival, photographer Claudia Andujar and Davi Kopenawa, director of the Hutukara Yanomami Association, which invited the Guardian to visit the reserve.

But the current garimpeiro invasion worsened after Bolsonaro took office. The president has said the reserve is too big for its population of around 26,000 indigenous people, and its mineral riches should be exploited. His ministers have met garimpo leaders.

But garimpeiros bring malaria, prostitution and violence, indigenous leaders argue, while scientists say the mercury the miners use to separate gold particles from mud and silt enters rivers and the food chain. Their pits and barges upset ecosystems, scare away wildlife, and fill rivers with mud that distorts fish behaviour and breeding.

Indigenous people used to call this upriver region Paixão de Mutum – or Curassow’s Passion – after the large, pheasant-like bird they hunted here. Now it is known as Tatuzão – Big Armadillo – for the pits that miners have gouged out of the forest. Miners have replaced the mutum.

“Somebody should help us. The government doesn’t care, it wants to finish indigenous people off,” says Geraldo Magalhães, 42, a Ye’kwana indigenous man and deputy chief of Waikás village, a two-hour boat-ride away. In November leaders of the majority Yanomami and much smaller Ye’kwana tribes sent a letter to Bolsonaro. “We do not want garimpo and mining on our land,” it said. “Garimpo out!”

Funai, the national agency which works to protect indigenous lands, plans to reopen three bases in the reserve. But repeated army operations have failed to shift the miners.

Just a few minutes upriver from the ruined camp, work has already resumed in an enormous mining pit, where tarpaulin and scaffolding made of logs and twine hold up a bank of earth. Three men toil waist-deep in mud with a hose jetting water under an uprooted tree. Mud pours down a rough wooden sluice, while black smoke belches from a deafening diesel engine: a hand-operated industrial hell amid the wild tropical beauty.

“We are here to get gold. These are our riches,” says garimpeiro Fredson Pedrosa, 40. “Everyone here is counting on the army leaving so they can work again.”

The men are from small towns in Brazil’s impoverished north and north-east, where they say minimum-salary wages of around US$250 a month (£194) are barely enough to live on. “You do this to keep your family,” says Denilson Nascimento, 33.

Garimpeiros say they voted for Bolsonaro after he promised to legalise their trade. “We know it damages the environment,” says Antonio Almeida, 24, who runs a bar here. “But there is a lot of nature, no way you can kill it all.”

Wildcat mining is deeply entwined with local life in Waikás. Four villagers work as boatmen for the miners, others sell food at Tatuzão and two run a smaller mining site nearby. Tolls on the garimpo boats paid for generators, boat motors and televisions.

“The garimpo is a reality and they’re used to it,” says Edmilson Estevão, 33, who was raised in the village and works for the Ye’kwana association Wanasseduume. Some villagers work with the mining, others reject it, but the Ye’kwana keep their differences to themselves. “Same family, same blood,” he says.

The garimpo has impacted heavily on hunting, fishing and water quality. “The prey is getting further and further away. Fish are disappearing, and are contaminated with mercury,” says Júlio Ye’kwana, 39, Wanasseduume’s president. “Wild pigs used to live around the village. Not anymore.”

When mining in the Tatuzão area was operating at full pelt, the river where children bathe and families collect water thickened with mud. “The water was very dirty,” says Nivaldo Edamya, 34, the village chief. “What garimpo does is bad. Deforestation, various diseases, that’s why I am against them.”

Academic research on the impacts of garimpo – or Artisanal and Small Scale Gold Mining (ASGM) – on biodiversity backs up these complaints.

Marcelo Oliveira, a conservation specialist at the World Wildlife Fund has found high mercury levels in fish as far as 150km from ASGM sites in the Amazon. He and other researchers found mercury in Amazon river dolphins – nearly half of those studied had dangerously high levels – and other researchers found record mercury levels in jaguar fur near ASGM sites in the Brazilian Pantanal. “This is an invisible problem,” he says.

Birds and larger mammals are sensitive to changes in forest cover and vegetation and flee garimpo areas, says David Lutz, a US-based research assistant professor in environmental studies at Dartmouth College who has studied ASGM in the Peruvian Amazon for a decade. “Massive disturbance. This is like a bomb going off. This is as drastic as you’ll see,” he says, after viewing photos of Tatuzão.

A study carried out by Lutz and colleagues in Peru found water quality was severely impacted near ASGM sites. Mud and silt thickened rivers, reducing visibility, which would disturb seasonal behaviour and even the breeding habits of fish and the life cycles of insects. “There is a handful of species that can handle this change, so those species become dominant and it lowers the numbers of other species,” says Lutz.

Near Waikás, two rough-hewn wooden barges used to dredge for gold are hidden in a tributary. Banks of sand, stones and mud sucked up by the barges had formed in the river. “They are reshaping the river structure,” says Lutz. “This will really change the sediment.”

In the 1980s and 1990s, William Milliken, an ethnobotanist at Kew Gardens documented the impacts in Yanomami areas degraded by ASGM, such as disappearing caiman and a reduction in plants such as fish poison vine. “It’s likely to happen again,” he said.

The mercury that miners use to separate gold particles from mud and silt is dumped into rivers and burned off into the air, says Luis Fernandez, a tropical ecologist and director at the Wake Forest University centre for Amazon Scientific Innovation in the US.

Mercury spreads into the aquatic ecosystem via a process called biomagnification and concentrates rapidly as it passes up the food chain.

“The food chain acts like a signal amplifier,” he says. “Environmental chemistry in the tropics is much faster than in temperate regions.”

A study published in 2018 found that 92% of indigenous people in a village near Waikás, where a garimpo site operated, had higher than safe levels of mercury in their hair. In Waikás, the level was 28%. “Here, all the garimpeiros use it [mercury],” says one miner.

An hour’s flight across the rolling hills of jungle from Waikás – passing over a garimpo pit and camp with its own vegetable garden – brings you to the health post at Maloca Paapiú. The Yanomami people it serves live in communal houses of extended families deep in thick forest, reached by muddy, winding trails. Here, men and women use black and red face and body paint and women wear short skirts of fronds, bamboo spears in their noses and cheeks; barefoot children skip nimbly across the slippery logs that serve as bridges across numerous streams and rivers.

Garimpeiros overran the region in the late 1980s. Now they are inching closer again.

Noemia Yanomama, 40, says she saw a garimpo camp near the hills where she hunts. She worries young indigenous men will bring sexual diseases from prostitutes in the camps. “Soon they will get close to the community. That makes me very sad,” she says.

Young men and teenage boys gather daily at the health post to charge cellphones they bought working on garimpo sites reached by hours of walking. One site abandoned this year was just a few hours away. 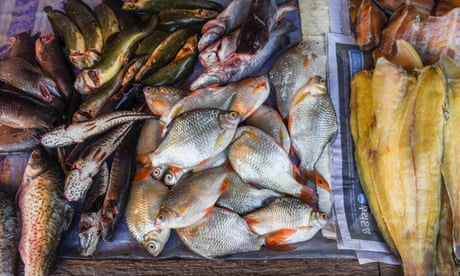 This is creating a generational divide with their parents, who still hunt with bows and arrows. “The garimpo is not our friend. We call it a disease,” says Tibiana Yanomama, 42.

His son Oziel, 15, escaped to the nearest garimpo with his friend Marcos, 21. Both spent three weeks working there, clearing jungle, before Tibiana went and dragged them back.

“I wanted shoes, a machete, a sharpening file,” Marcos says. “I wanted a hammock. I wanted to work.” He was paid five grams of gold (worth around $180). He saw garimpeiros working with mercury and drank beer and sugar cane rum. “I got very drunk,” he says, with a nervous laugh.

Tibiana is furious with Oziel. “The youth don’t listen,” he says. And he is livid with Bolsonaro’s plans to legalise garimpo. “What does he want for Brazil? This forest is Brazil,” he says. Oziel caught malaria, a recurrent problem in garimpo camps, where pools of waste water provide breeding grounds for mosquitos. The Maloca Paapiú health post handles 15 new cases a week.

For the Yanomami, nature and spirituality are intrinsically linked: every rock, every waterfall, every bird, every monkey has a spirit, says Maneose Yanomama, 55, shaman of the Sikamabi-U community. And the spirits of nature are sounding the alarm. “The whites are getting closer. They are damaging our land, they are destroying our rivers, they are ruining our forests,” he said. “Nature is very scared.”