Nearing the Tipping Point: Drivers of Deforestation in the Amazon Region 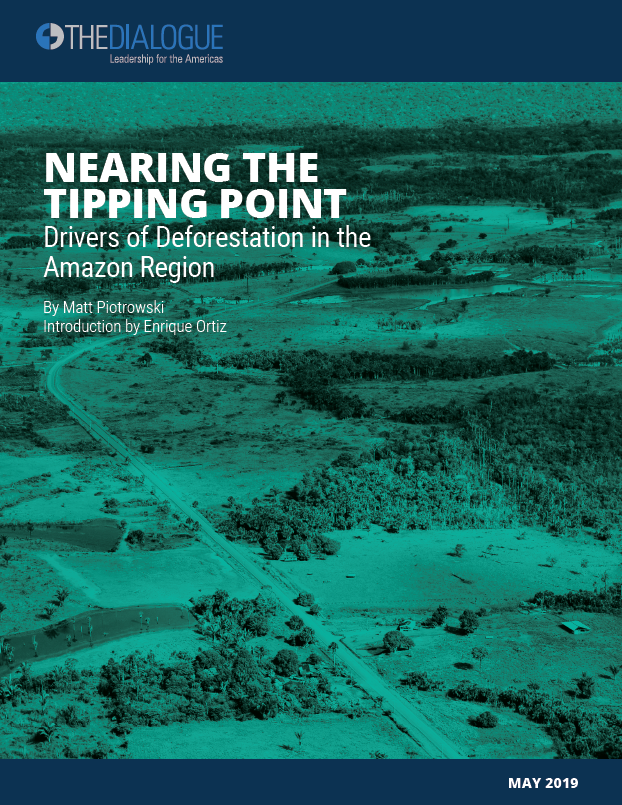 The largest tropical rainforest on the planet, the Amazon plays a critical role as a storehouse of carbon and mediator of the global water cycle and holds a greater share of the world’s known biodiversity than any other ecosystem. However, according to “Nearing the Tipping Point: Drivers of Deforestation in the Amazon Region,” a new report by the Inter-American Dialogue in collaboration with the Andes Amazon Fund, unchecked development is placing the Amazon under threat, pushing deforestation rates to near-record levels throughout the region. The main causes of deforestation vary between countries—from cattle ranching and soy production to infrastructure development, land grabbing, and illegal gold mining, the report finds. A lack of oversight—often due to inadequate resources for environmental regulation—is a pervasive challenge in Amazonian countries, and signs suggest this problem is only growing. In his first months in office, Brazil’s president, Jair Bolsonaro, reduced the already strained budgets of national environmental and indigenous offices. In Colombia, the peace agreement with the FARC created a vacuum of governability now occupied by illegal armed groups, resulting in land grabbing.

The report, authored by Matt Piotrowski, senior analyst at Climate Advisers and an independent contractor, with an introduction by Enrique Ortiz, program director at the Andes Amazon Fund, identifies the key forces driving deforestation in Brazil, Peru, Colombia, Bolivia, and Ecuador, analyzes policies aimed at reducing deforestation, and proposes measures to encourage the conservation of the Amazon’s rich resources.

Read the article in PDF here: Nearing the Tipping Point: Drivers of Deforestation in the Amazon Region