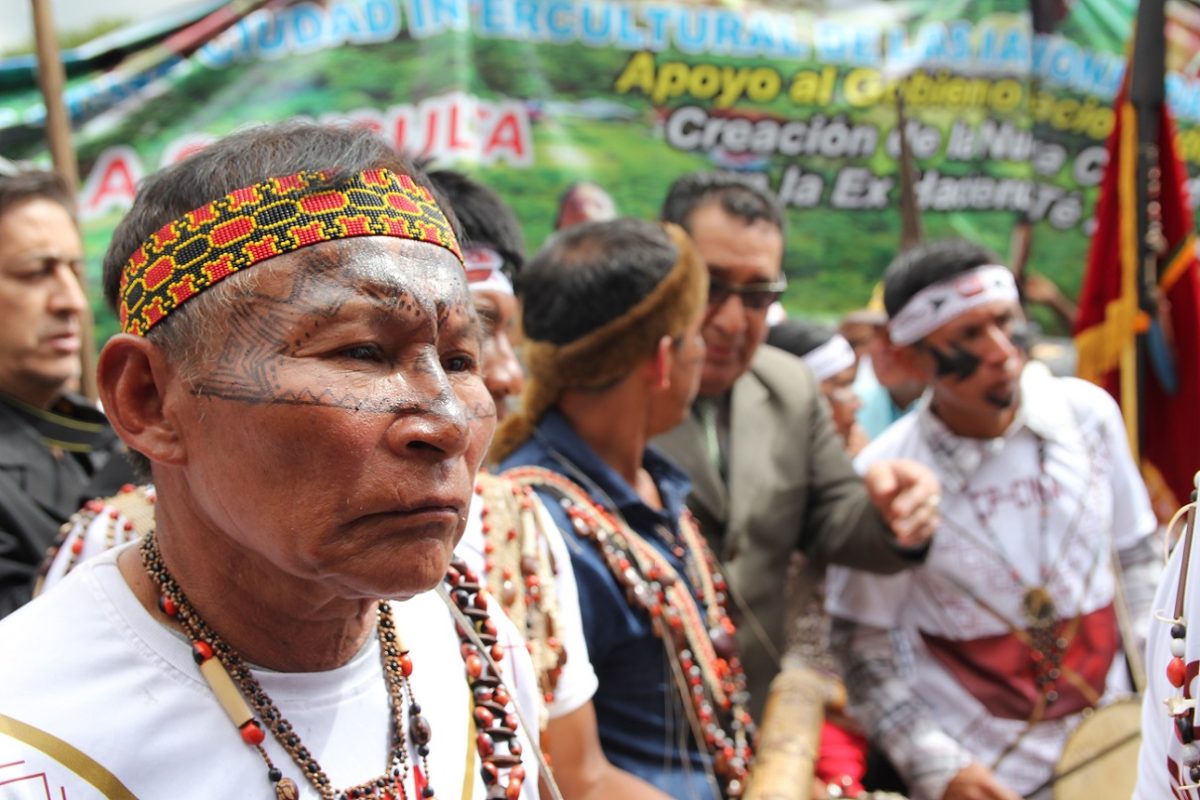 Indigenous communities in Latin America and the Caribbean have consistently asserted that they are the best guardians of their forests. Now, a recent U.N. report has mainstreamed this argument, adding that these communities are also under increasing threat and supporting and empowering them will be the most cost-effective response, not only to tackling carbon emissions, but also to protecting biodiversity and our weather systems.

“We are in a very complex situation, not only with the pandemic but with many pandemics. Extractive industries, illegal mining, deforestation, palm oil monocultures, cattle ranching,” said José Gregorio Díaz Mirabal in an interview with Mongabay. Mirabal is from Venezuela’s Guarinuma Indigenous community and is the general coordinator of COICA, a regional organization representing more than 3,000 Indigenous organizations and roughly 20,000 communities in nine Amazonian countries.

This is a key year for the environment, with major summits scheduled on climate change, biodiversity, and food systems. In the face of a critical moment for the planet and its beings, these gatherings may also be the first time many of the attendees — scientific experts, representatives from civil society and Indigenous organizations, and decision-makers from governments, private companies, and international cooperation organizations — will be meeting in person since the beginning of the pandemic. Plans and approaches to tackling these global issues will be discussed and shaped in a context where post-pandemic economies will need cost-effective solutions. And Indigenous organizations like COICA are pointing out that Indigenous lands, world visions and ways of life are integral to the solutions.

Solidifying this position is a newly published report by the Food and Agriculture Organization (FAO) of the United Nations and the Fund for the Development of the Indigenous Peoples of Latin America and the Caribbean (FILAC).

“The solutions that we propose at this point have the weight of evidence behind them that they actually do work,” report lead author and FAO manager David Kaimowitz said in an interview with Mongabay. “If you do these things, you will end up with lower deforestation, which will end up with climate mitigation and biodiversity conservation.”

Kaimowitz began the research project in early 2020 and says that previous studies showed a relatively weak argument for investing in many Indigenous territories as they remained in almost pristine condition. But he says this changed with more evidence over the years of the imminent threats of the climate crisis and because many once remote areas have come under siege from outside interests and diseases like COVID-19. The evidence — a review of more than 300 studies over the last 20 years, a quarter of them from the last two years — tells a very consistent and compelling story.

The studies recognize the extent and importance of Latin America and the Caribbean’s Indigenous peoples and Afro-descendent communities who still practice ancestral ways of life in protecting forests. The report explored reasons why forests in their territories are better protected from deforestation and degradation, which include cultural factors and traditional knowledge, recognized land rights, and forest incentive policies, among others. These findings support the report’s five principal policy and investment recommendations for governments, companies and development agencies: Strengthen territorial rights, compensate environmental services, promote community forestry, reaffirm traditional cultures and knowledge, and support territorial governance and Indigenous organizations and institutions.

“The report is not proposing that the Indigenous communities are left alone in their forests,” Cunningham said. Rather, she says it proposes options that recognize the communities’ rights and forms of governance, support community forestry practices, connect them to markets in different ways, and compensate them if they provide environmental services.

A World Resources Institute (WRI) study, included in the FAO report, shows how formally recognizing the land rights of Indigenous communities is a low-cost, high-benefit investment. It calculates that the costs of securing Indigenous lands are five to 42 times lower than the average costs of avoided CO2 emission through fossil carbon capture and storage for both coal- and gas-fired power plants.

This study also shows that titling Indigenous territories in the Bolivian, Brazilian and Colombian Amazon avoided between 42.8 million and 59.7 million metric tons of CO2 emissions per year — valued at $25 billion to $34 billion and the equivalent of taking between 9 million and 12.6 million vehicles out of circulation for one year.

The potential savings are enormous considering that Indigenous peoples physically occupy 404 million hectares (1 billion acres) in Latin America, almost 60% of that in the Amazon Basin — an area larger than France, Great Britain, Germany, Italy, Norway and Spain combined. The forests in their territories contain almost 30% of the carbon stored in Latin America’s forests and 14% of the carbon in the world’s tropical forests.

Thanks to established carbon markets, these values can be reliably calculated and already provide strong economic arguments to support the report’s community investment recommendations. This is even before including the more difficult-to-calculate values of local and regional ecosystem-service benefits, including regulation of local climate dynamics and water cycling, hydrological services, pollination, nutrient retention, and biodiversity.

Yet despite the benefits of the Indigenous communities’ custodianship, the forests they  protect continue to be lost to illegal logging, land grabbing, expanding cattle ranching and agriculture, mining, illicit crops, and infrastructure construction. This is even more critical as recent studies show that the Amazon Rainforest is rapidly approaching a tipping point that may turn it into a savanna, causing untold hardship, not the least economic, if the current economic model and destruction continue.

When these communities resist and defend their territories, their leaders are often criminalized and even killed. Front Line Defenders reports that at least 331 human rights defenders were killed globally in 2020, 26% of them defenders of Indigenous peoples’ rights. Most of these murders were in Latin America, adding to the least 327 Indigenous peoples’ rights defenders who have been killed since 2017. The Escazú Agreement was supposed to have helped combat the victimization of these activists, yet many of the 24 signatory countries still need to implement the treaty.

Levi Sucre Romero, a leader of Costa Rica’s Bribri community and president of the Mesoamerican Alliance of Peoples and Forests, told Mongabay that some of the biggest contributions from Indigenous communities come from their coexistence with natural resources and that their concept of forests is based on a spiritual and holistic worldview that is in equilibrium with life and nature.

Yet Romero said communities also need to develop their capacities and methodologies, strengthening their governance structures, and that in a rapidly changing world, “the moment has come where our worldview and technology need to come together.”

Using technology and improving information sharing empowers community leaders to make more informed decisions about their resources, including developing sustainable forest governance practices like harvesting timber and forest products like cacao, monitoring and reporting on their forests to help face the growing threats of invasion by external actors, and being better interlocutors between the interests of communities, the state and private companies.

Since 2017, the EU-supported Amazonia 2.0 program has trained members of Indigenous, campesino and Afro communities as technical monitors and rangers, serving 120 Amazonian communities and covering 1.5 million hectares (3.7 million acres) in Brazil, Colombia, Ecuador, Guyana, Peru and Suriname. Using technologies like GPS, drones and cellphones, these communities can have updated information to sell products from their forests, rapidly alert government authorities of deforestation and illegal trade in wild resources, and provide information to be used in national and regional policies on forests and climate change.

“People have realized that the decisions are their own, the decisions are of the community,” Indigenous leader Gilberto Nenquimo said in an interview with Mongabay. “I feel very proud now that through this project we have also been able to get medicines for the same families in the territory.”

Nenquimo is the president of the Waorani Nation in Ecuador’s Amazon, and was previously a technical monitor for Amazonia 2.0. Before joining the project, he says he had never used a GPS device or a computer. Now, his community, which focuses on economic and women´s empowerment projects in growing cacao and producing their own chocolate, can connect with the market to sell their products, and monitor oil wells in the region. Additionally, they can make environmental reports in two minutes instead of walking for five days, which vastly increases response times to illegal logging and other threats to their territory.

Braulio Buendía, Amazonia 2.0’s regional coordinator, says that in addition to the technological aspect, the project also has a social component, where monitors in the countries can share information with one another via platforms like WhatsApp and upload their data onto interactive maps on the regional Geovisor platform. And in Buendía’s native Peru, the monitors achieved accreditation by the national government, a major step for the project’s sustainability there.

Yet as much as communities continue to demonstrate their efficiency as the custodians of their natural assets, most governments in Latin America still rely on extractive economic models. And as these governments focus on their post-COVID economic recovery, there are concerns they will revert to a business-as-usual approach to try to boost short-term economic gains, worsening the pressures being put on Indigenous territories.

But the FAO report authors argue that in addition to the immense value from ecosystem services and carbon offsets, supporting these Indigenous communities to protect and manage their own forests could provide a cost-effective sustainable solution to create or recover hundreds of thousands of jobs in forestry, agroforestry, tourism, education and cultural activities, while also avoiding new pandemics as well as providing other social, environmental and cultural benefits.

Indigenous communities in the region have been especially vulnerable and hard hit by the pandemic, according to a 2021 U.N. report, with an Oxfam report asserting that a lack of urgent action could result in an ethnocide of these communities. COICA general coordinator Mirabal says that in many communities in the Amazon, responses from national governments have been insufficient, often made worse by historic neglect, forcing Indigenous communities to shape their own responses to the health crisis. Working through the Amazon Emergency Fund, an alliance of Indigenous groups, NGOs and donor partners responding to the COVID-19 emergency, COICA raised $2.7 million since May 2020 and has been dispersing these funds to purchase much-needed oxygen, medicine, food and medical kits, and PPE.

Mirabal says the COVID-19 response shows that in confronting the climate crisis, governments and international funders should be providing funds directly to communities. He says the way Indigenous organizations directly received COVID-19 emergency funds and transparently paid them out shows they can do the same with climate funds. In this vein, in December 2020 COICA called for the implementation of an Amazon Climate Emergency Fund, which aims to provide a direct mechanism to finance climate strategies led by Indigenous communities in the Amazon.

“We are not just numbers; we are an integrated world vision,” he said. “We don’t see the territory as a piece of land, not something you can buy and sell, we see it as all-encompassing, as our own home. If it burns, we all die.”